I was stuck in traffic a few days ago, in that horrible bit of road by Harrods where two major routes from out west merge into one and there are roadworks, so that seven lanes suddenly drop down to one and you can spend half an hour travelling 100 yards.

For a while next to me I had a flat-bed transporter with a BMW on the back. The Beemer had been next to a fire, and probably a pretty fierce one at that. The paint, properly silver, had been changed by the heat into a dull bronze colour but the tyres were flawless – most likely changed to help get it on the back of the transporter.

Most of the plastic had melted. The door trim had gone – just the plastic studs that had held it in place remained in neat rows. The outside edge of the wing mirror was charred and distorted, while some of the window trim had curled and half of the the mudflap behind the rear tyre had evaporated. The door handles were warped out of shape. And, most spectacularly, the coloured plastic of the indicators and rear lights had liquified and begun to run down the side of the car like scarlet and gold lava.

It was, in short, a very strange sight – a car that was probably pretty functional in its basic operations, but completely unusable nonetheless. A full-sized rich man's motor ruined like a child's toy left uncared-for too near the fireplace.

It must be open season on BMWs, as my neighbour the Freemason (see post from some months ago) had his Z3 written off after his wife had an unlucky incident on a nearby road. Some considerable time after he 'fessed up and explained why it wasn't there any more, it reappeared. Presumably wherever it was stored after the accident handed it back to him. It's pretty spectacular – the whole of one front corner simply isn't there any more.

It must be quite crushing, to return home each day and see it ruined. One should never get too attached to possessions – they should be expendable. But to have such a big purchase as a car written off thanks to a bit of melted plastic or a localised bit of destruction must be very galling indeed. 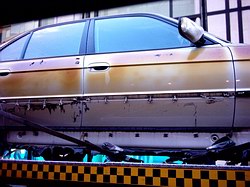 A wide band of plastic trim is no more 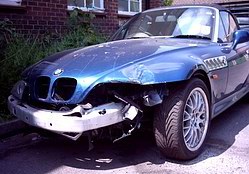 Previous: The secret squirrel just got shot
Next: What the Butler saw