Went into central London last night and ended up at the National Portrait Gallery, partly to look at the collection of Tudor paintings and partly to visit the BP Portrait Award exhibition.

The Tudor stuff is rather amazing – the originals of some of the most famous images in British history, familiar to anyone with even a passing interest in the age. You've seen the reproductions countless times, but to be there with the originals is quite a thing – to be able to look closely enough to see the brush strokes, or the raised blob of white paint used to make the highlight on a pale grey pearl. Astonishing.

Anyway, the three Tudor rooms are here, here and here. 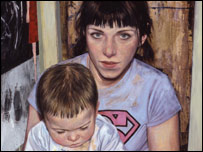 Like any competition the BP Portrait Award was a bit hit and miss, but its hits were very good indeed. A few – particularly among the self portraits – were self-indulgent and hagiographic, and others were so hyper-realistic that they were indistinguishable from photographs. But others just *looked* like photos from a distance, with closer inspection revealing the brushwork and colour choices. And most of them gave such a strong feeling of a real person looking back at you from the canvas.

The winner (The Miracle by Stephen Shankland) was a good example of that. Realistic from a distance, the closer you looked the more you saw the skillful construction of the painting – for example, the numerous colours used to make up the flesh tones, pale blue among them. The story behind the painting is a bit 'hearts and flowers' but the artist really succeeds in giving a sense of his subject's strength of character.

So, an hour well spent.

From high art to low culture: there's some possibility that this phone-in thing with BBLB might happen today. They phoned again this morning and we made arrangements for me to go on. I won't believe it until it actually happens though. Interesting to discover how carefully managed a supposedly spontaneous phone-in is. It does make it pretty apparent that the programme itself is likely to be as tightly scripted as possible, despite appearances.

Enough of that. I go now.

Previous: Ruddy technology
Next: All dressed up with no place to go