Here's a tale about how offices, although made up of many individual people with many different agendas, will often act as a group without any form of consultation taking place.

Three collections were put round on Friday, each with a card to sign and an envelope to donate money in.

One was a birthday card for a popular and attractive woman whose work brings her in contact with most of us from time to time, and who is therefore a familiar face everywhere.

One was a birthday card for an obscure manager who is chiefly famous for leaving the recent Christmas lunch early and then later coming back to the bar where it took place to tell the last few revellers to get back to work.

The third was a leaving card for a quiet but good-humoured techy with a reputation for going out of his way to help people with their problems. He's heading off to Zimbabwe to teach IT skills to disadvantaged children, if he can raise £3,000 to take part in the project.

When the first one went by me it was doing fine – lots of signatures, a fair amount of cash. A normal collection.

The second was almost embarrassing – hardly a single signature, only a couple of pounds raised.

The third was, by any standards, spectacular. The card was a large one, and it was so full of signatures they had spilled onto the back of it. We never found out how much was collected because money was still coming in while we were gathering for the presentation, but we think it was about £225.

There was no group decision that one collection should be taken to heart more than normal, and one shunned – just a lot of people all doing the same thing independently of each other.

And, you might say, a case of people reaping what they sowed.

(Assuming he makes it out to Zimbabwe, David plans to start some sort of journal or log – I'll link to it when he does.)

And here's a picture from today's shopping expedition. Remember children: a bag is for life, not just for Christmas. 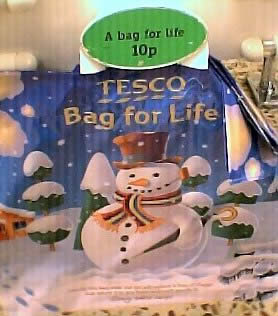