In Her Maj's back garden

A couple of days ago we fancied some time out from home and took a train to Windsor. I had some vague thought of pottering around the shops and taking a relaxed look at the castle, but Beloved Other Half is made of sterner stuff and suggested instead that we walked south to Virginia Water.

This we did. The shops looked pretty crap, to be honest.

The map puts the distance we walked as about 10km (a little over six miles) but it felt a great deal longer at the time. It was very varied walking, most of it through Windsor Great Park – the Queen's back garden, as it were. After we'd left the railway station and looped through the town around the base of the castle we found ourselves at the head of the Long Walk. This may not have the most original of names, but it certainly does exactly what it says on the tin. Dead straight, as far as the eye can see, from the gates of the castle to the far-off hill-top statue of one of the King Georges on horseback.

This is a walk beloved of the author Bill Bryson, who once lived nearby. He tells the story of wheeling a small offspring on a tricycle when he became aware he was blocking a car. He turned around and found its occupant was the Princess of Wales. On a (presumably) earlier walk he ventured as far as Virginia Water where he found a lunatic asylum, got a job there, and married a nurse. Happy days for him, but we lost his route the moment we left the statue and climbed down to skirt around the base of the hill. We therefore avoided getting embroiled with matrimony, lunacy or royalty.

For the next few miles we walked through what was indisputably a great country estate. Towering mature oaks, wide curving drives, model farms, peace, quiet and a lack of development. Thunder rumbled in the distance and a few drops of rain reached us, but although the skies were iron-grey we escaped the worst of the weather. Just before we were due to hit a road we plunged left down a red clay track through trees, countless hoofprints breaking up its soft surface. Regular signs warned that pedestrians should be aware that this was a ride, or rather a Ride, intimating that if we weren't careful we would be ploughed down and trampled by a veritable cavalry charge.

Despite this dire warning, the only horses we saw were safely behind a fence and we survived to emerge by a trickle of stagnant green water. This was the unregarded tip of the several miles of ornamental lake that makes up Virginia Water and, as we walked beside it, it broadened and deepened and attained character and beauty.

All too soon (for our enjoyment) but after far too long (for our aching joints) we left the lake and cut south for Sunningdale station, a good mile off but rather closer than Virginia Water station. Sunningdale carries the air of a chocolate box village that has outgrown such childish sweetness and is now sprouting hair under its arms, finding its voice is going wonky at times of stress, and developing an interest in girls. It has an attractive church, a historic-looking memorial hall and a pigeon fanciers' club that was meeting as we walked past the hall – a cheerful voice, caught in mid-conversation, boomed “I thought you'd gone queer“, but it was unclear whether he was talking to a fellow fancier, or one of the pigeons. Set against this bucolic charm, however, is a thoroughly drab commuter railway station and the usual swathe of kebab houses and suchlike hinting at urban sprawl.

We bought our tickets, slumped down on the platform benches, and waited for our train. It was late, and the toilet didn't work. It couldn't spoil a good day, but we're sure Bill Bryson would have had something to say about it.

Anyway, photos after the cut tag. Rather a lot, I'm afraid, but none are over 20k. 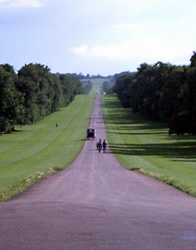 Long Walk
By name and by nature, you might feel, as it disappears into the distance. 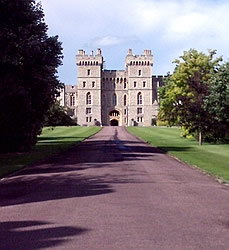 Castle gates
Before you set off you can talk one last look back at the castle… but your chances of cadging a lift are fairly slim. 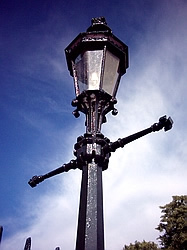 Lamp post
Just one of those images that seemed worth capturing, really. 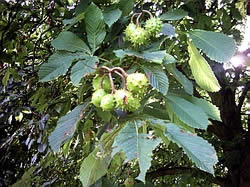 Horse chestnuts
There's a double avenue of trees alongside the Long Walk, all of them horse chestnuts. The spare, outside, row is for when the inner one eventually dies. Nothing like royalty for forward planning. 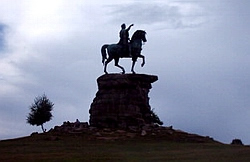 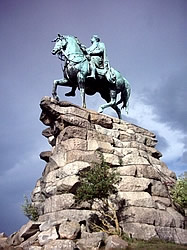 And again, in colour
A change of position removes the backlighting and allows the green verdigris to show up – along with slightly dodgy, hubristic, Roman emperor togs. 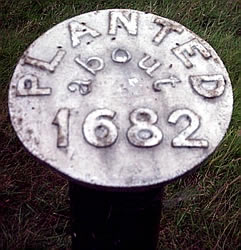 Plantation marker
These things are scattered all over Windsor Great Park, marking when plantations were first, er, planted I suppose. 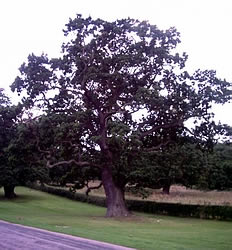 Royal oak
These days, you rarely see oaks presented at their best – usually they're choked with ivy, or half-dead, or crowded by other trees. It was good to see this one had been given room to spread itself out. 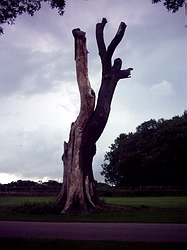 Blasted and dead
Not all the oaks were flourishing, of course. This one – dead, lightning-struck and partly stripped of bark – had clearly seen better days… 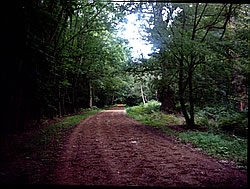 Ride into danger?
The trees closed in, as did the rainclouds, and the ground showed evidence of many horses being ridden hard.

No escape
Doesn't matter which way you turn – they'll get you. 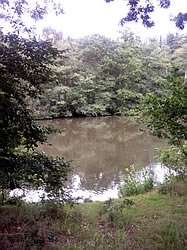 Virginia Water
This lake snakes on for miles – if walking north to south (or vice versa) you could add an unpleasant distance to your hike by forgetting to aim for one of the very few bridges. 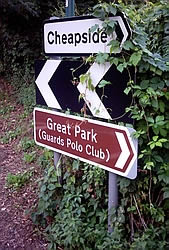 Not bloody likely
If there's one thing this place is not, it's cheap – property prices are as high as they come. It must be a good area if the Brigade of Guards hangs out there…