Nailing my colours to the mast 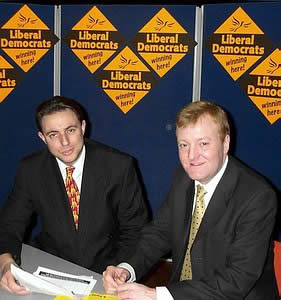 “Winning here!”
A washed-up hack with only a short time left in his political career poses for a campaign photo with Charles Kennedy.

That photo of me and the boss taken during the 2001 general election, when we both had fewer chins, should illustrate where I stand in the madness that's currently gripping a miniscule proportion of the Liberal Democrat party, namely the ones with the letters “MP” after their names. I post it not to show off, but simply to make it clear that, during a period when most of Charles Kennedy's supposed allies are retreating from him faster than an Italian tank regiment, some of us are proud to have been associated with him and don't mind who knows it.

I am, to put it mildly, furious at the antics of the Parliamentary party – just a tiny fraction of the membership and in most cases merely the person standing on top of a very large pyramid of activists who worked their little socks off to get their man or woman to Westminster and who are now wondering what got put in their Horlicks when they arrived there. Our MPs seem to have forgotten that in the set-up of the Liberal Democrats there's a leader and then there's everyone else, whose votes are equal. If they don't have confidence in the leader that's their problem – we chose him, and for each MP a group of dedicated people chose them to follow his lead.

So, I have a message to those MPs who want him to stand down, and that includes ones who I've worked side-by-side with in the past and respect greatly, such as Norman Lamb and Susan Kramer, just as much as it applies to such over-promoted lightweights as Sarah Teather.

Either stand against him if you dare, rally behind someone else who is prepared to stand if you don't have the nerve to do it yourself, or shut up and get on with what your local party sent you to Westminster to do. In case you've forgotten, that was to represent your constituency's interests on the national stage, advance the principles of liberalism as expressed by the preamble to the party's constitution (particularly the first sentence of it), and assist the leader chosen by the membership as he builds towards a Liberal Democrat government.

Don't hide behind a load of sanctimonious wank about “I have great affection for Charles who has led us with considerable skill, I admire his courage and wish him well but think he must now stand down gracefully for the good of the party as, sadly, we can't work with him anymore.”

If Kennedy stands in a leadership election I'll both vote and campaign for him and if he doesn't then I'll write his name onto the ballot paper rather than support whoever eventually does.

I hope he can survive as leader, but I fear he's doomed after today's Murder on the Orient Express display by his MPs, and in my book that's a real shame.

After all, if he can lead us to our best result in a lifetime while drunk as a skunk, what dizzying heights could he reach now he's pledged to do the job sober?

Previous: From the passenger seat
Next: Strange days