For reasons that make a long and not very interesting story, I had to travel into work by train on Tuesday instead of driving.

This was wildly inconvenient, as a 20 mile / 30 minute drive north west was instantly transformed into a two hour marathon that took me eastwards right into central London before I could head out beyond the M25 again.

So, to commemorate that strange day where a straightforward journey was transformed into a tangled meander, here are some photos of lines and curves. 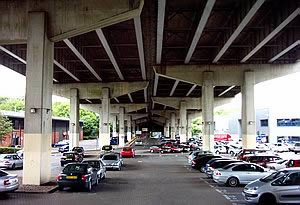 March of progress
The M40 motorway stalks on stilts over an industrial estate car park. 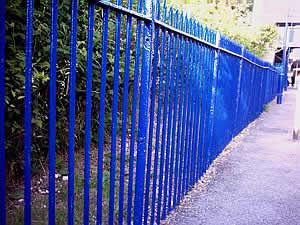 Blue barricade
The freshly-painted fence at Beaconsfield station vanishes in the distance along the platform. 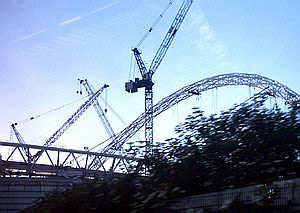 Wembley rising (perhaps)
From the train window, cranes surround the arch of the new Wembley Stadium in the week that its finances collapsed.

Previous: The world is full of stupid people
Next: Danse Macabre