The house of discipline, and other photos

I can remember when products were built to last and didn't stop working just because they'd been thrown across the room in a cold fury a few times. I say this because my phone finally started malfunctioning beyond a level I was prepared to tolerate, so I had to replace it.

Having said I didn't want a phone with gadgets, I ended up having to buy one with a camera – and of course I'm now bemoaning the low quality of the pictures it takes. Still, at least it's got me taking photos again. 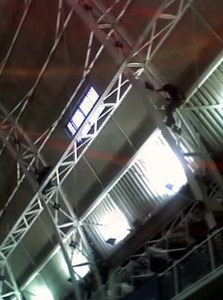 Dancing on the ceiling
The dark shapes of fitters roped to the roof inside the Business Design Centre hang cables in preparation for an exhibition. 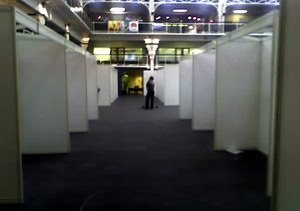 Nothing to show for it
A fitter stands in the middle of blank exhibition stands that will soon be filled with all the clutter and colour of a trade fare. 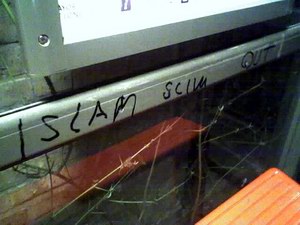 Why I hate living here
We have equal opportunity bigots here – they hate everyone, whatever their colour or creed. This bus shelter graffito, along with National Front stickers nearby, targets Muslims – but everyone gets it in the neck eventually here. 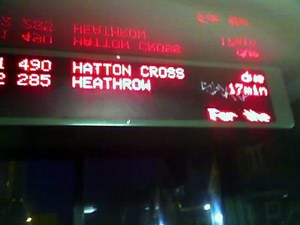 Reflections on a long wait
On a wet, chilly evening, the bus indicators reflected on the ceiling of the shelter – and demonstrated that how cold you got depended rather on where you were travelling. 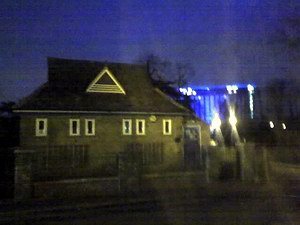 They've landed!
Not, in fact, an alien invasion – just the old and new Feltham. The glare from a hotel marketed squarely at airport travellers shows behind what used to be a toilet block – and now seems to be an art studio, or some such thing. 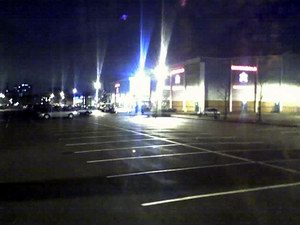 Lights, camera, action
Wet Tarmac and sodium lights give the local cinema complex an unworldly look. This view, coincidentally, is exactly the one seen by the central character of my quarter-written novel at a crucial life-changing point in the narrative. Not that you need to worry about that. 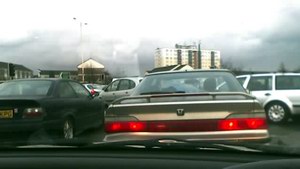 Round and round and round about
There is a roundabout out Uxbridge way that has without a doubt the worst traffic jams I have ever had the misfortune to have to weave a path through. It really is a case of move forward by inches and every car for itself. 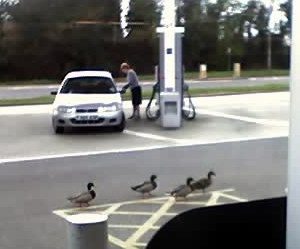 Ducks in a row
I'm not sure if they wanted the car wash or just to top up with unleaded, but these ducks marched across the forecourt of the petrol station where I was having my lunch in a very purposeful manner. 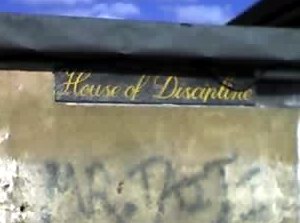 Do as you're told
This sign is on the garage of a house on one of my regular leaflet rounds during the council elections. There's nothing else on the outside to suggest the place is still conducting whatever dubious business produced the sign – but I'm certainly not canvassing there! 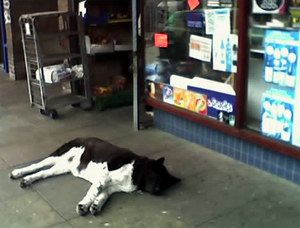 Don't even try it
Our local general store has the most enormous guard dog you ever did see. Shame it's usually asleep across the shop door…

Previous: This is not Phil talking
Next: Fairey story