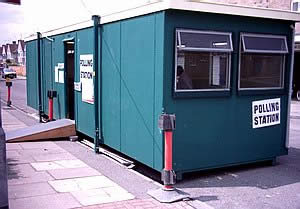 Well, I did my civic duty earlier this afternoon by voting, and I do genuinely find it exciting to go into a polling booth and put my crosses next to the candidates and parties. I love the sense of occasion, which is one of the reasons why I'm glad we didn't get the all-postal voting trials down here.

Our polling station used to be a disused unit in a parade of shops around the corner, but for the past few years all the units have been let (hurrah for the local economy) so the council brings a Portakabin along a few days before the election and drops it across the road from them. It looks shabby and run down and a little sordid as a means of exercising democratic freedom, but equally it says “we're determined to give you the chance to vote, whatever happens” in a way that a room in a school doesn't.

It was a little odd to fill in a ballot paper that didn't have my name on it for a change – I've got a bit used to it over the last few years. It was even odder to just stroll along at a spare moment rather than squeeze voting in during a mad rush of last minute campaigning and hustling.

Previous: Only when I laugh
Next: Only in England