A regrettable lapse into horticulture

I'm terribly sorry – I do hope you'll forgive me – but once more I feel the urge to write about vegetables. I do it from time to time.

I realise that's probably not why you visit here. All I can say on that front is “unlucky” – today we are doing potatoes and runner beans. And we are not ashamed of it.

In a small way, it's harvest time on the balcony that this year has replaced the allotment over which we toiled with such dedication last year. I am leaving the potatoes untouched in their Gro-bags – frankly, I have no idea how to tell from the bit above ground when it's time to harvest them. Can anyone advise? Last year we dug them up when disease killed the plants. This year they're resolutely healthy plants, all ruddy-cheeked and thrusting, and I fear I may end up leaving them unharvested until the winter snow does for them, crippling indecision and an unwilliness to wrestle with Gro-bags on a small balcony making me put it off again and again until Christmas comes and we need spuds with our dinner.

The chard, which was once a couple of sickly seedlings that lurked on the bathroom window ledge refusing to grow more than an inch tall, is now two sturdy plants like mutant rhubarb, all crinkly green-black leaves and ridged reddy-purple stalks.

The cos lettuces, sadly, elected to pursue height rather than lettuceness and are now taller than the corn and considerably less edible, but the runner beans next to them have not so much run as sprinted up their poles and along the balcony railings. Beans have been finding their way into all sorts of dishes in the kitchen, and very welcome they've been too.

Likewise the tomatoes, both red and yellow. As with all the vegetables, they haven't produced big yields, but it's early days yet and there's a lot of green tomatoes still on the plants, waiting for the right moment to change like traffic lights with an impish sense of humour.

Most gloriously of all, our chilli plant – in a pot on a window ledge – produced a chilli. It was picked and added to a Mexican dish and, boy, was it hot. Some of you may be unimpressed by one measly chilli, but you probably live somewhere sunny, like Texas (hi Sean). I live in a city on the same latitude as Nova Scotia. Even with the Gulf Stream to help out, 'chilli' ought to be a misspelling for the weather and not something you grow and eat.

So, unashamedly, here are some photos. 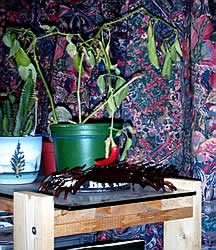 Weighed down by expectations
It's only one chilli, but the plant seemed to be pouring all its life into it. 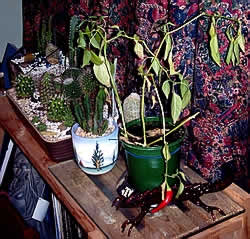 Hot and prickly
I'm not sure what we were trying to create by putting the chilli plant by the cacti and adding a semi-abstract metal lizard-thing, but it worked. 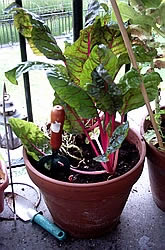 Chard
No, I'd never heard of it until we started growing it, either. 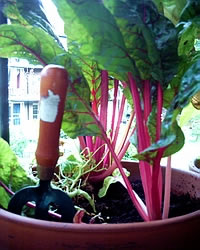 More chard
Well, the same chard actually, but from much closer – is there no end to the excitement? 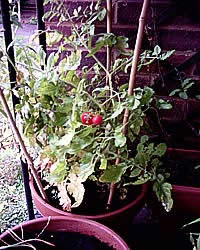 Two red tomatoes
Yay. Actually, there's a lot of green ones there too, if only you could see them. 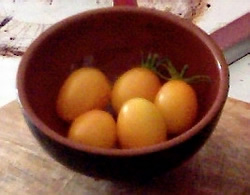 What happens to naughty tomotoes
They get picked and put in a bowl. Even if they are yellow, and of a fancy variety. 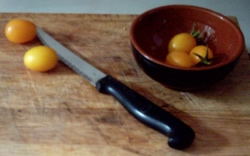 Tomato graveyard
They're not just for looking at, you know. And it's a lot less traumatic than slaughtering a favourite pig for its bacon.

And here are some recommended links that will cover some – but not all – of the topics that this post began by mentioning.

Previous: Random moments
Next: Random linkage and the blood of Jesus