I've been meaning to post these since Friday last week, when I met up with Beloved Other Half in town for lunch. Haven't had a moment to do it until now. 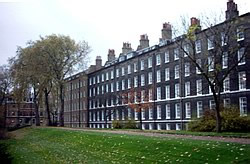 Gray's Inn
One of the old Inns of Court, the home of the legal profession and a real oasis of peace in the heart of London. 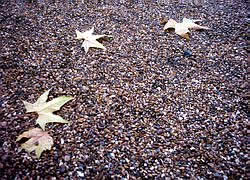 Fallen leaves
As fast as the gardener cleared them up, fresh autumn leaves fell onto the paths and gardens of the Inn 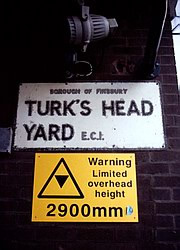 City signage
I love signs, and strange names, and the City is the place to go for both in abundance. A Turk's Head, incidentally, is a complicated kind of knot.

Times change
East Poultry Avenue is part of Smithfield meat market, but there's a Number One, Poultry right in the heart of the ceremonial City of London… how things have changed since mediaeval London and the industries that gave the streets their names. 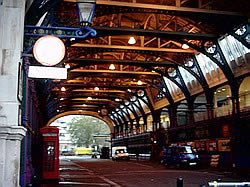 Girders and burgers
East Poultry is more an ornately-decorated tunnel than a road as it runs through the main building of the meat market. 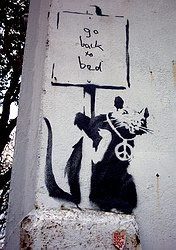 Rat race
The underground artist Banksy litters the City with his stencil-based graffiti artworks… I feel like I'm being manipulated by photographing one of them and saying 'oh wow' – but it's still a clever image and I like it, so I guess I grudgingly have to look past the trendy hype attached to the man…

Previous: Look, I was hungry, okay?
Next: Seeing red