In my household we tend towards the view that Douglas Adams wasn’t, in fact, a novelist but instead a philosopher and a researcher of the infinite who chose to present his theories and conclusions in the form of radio scripts and sci-fi novels. He was also – despite most of his work being set on other planets – one of the most observant chroniclers of London since Dickens.

Just after six he returned to Fenchurch’s house in the alleyway, clutching a bottle of champagne.

“Hold this,” she said, shoved a stout rope into his hand and disappeared inside through the large, white wooden doors from which dangled a fat padlock off a black iron bar.

The house was a small converted stable in a light industrial alleyway behind the derelict Royal Agricultural Hall of Islington. As well as its large stable doors it also had a normal-looking front door of smartly glazed panelled wood with a black dolphin door knocker. The one odd thing about this door was its doorstep, which was nine feet high, since the door was set into the upper of the two floors and had presumably originally been used to haul in hay for hungry horses.

So Long and Thanks for All the Fish

Adams famously drew on the parts of Islington he knew well for details to throw into the Hitch-Hikers’ Guide trilogy – for example, phone numbers as probability odds and the estate agency Hotblack Desiato as a minor character’s name.

The old Royal Agricultural Hall is still there, only it’s not derelict anymore, it’s the Business Design Centre and I work there a day or two a week. After Beloved Other Half reminded me of the passage quoted above I went off in search of the nine foot doorstep one lunch break.

Since I forgot it was down an alleyway I didn’t find it, but I did grab a few pictures of the sort of streets in the area – typical north London streets I suppose, except north London’s not my manor and the typical looks exotic to me still. Where I am, out west, we don’t have long rows of brick terraces like these and I was fascinated by the contrast – only yards apart were roads where the homes looked like elegant town houses and roads where they looked pokey and proletarian, despite being almost identical in design.

I found it easier to imagine Douglas Adams walking along the pavement than I did Arthur Dent floating above it.

Anyway, here are the pics. 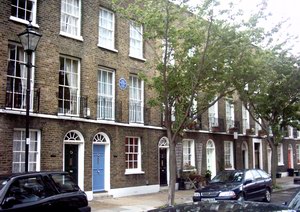 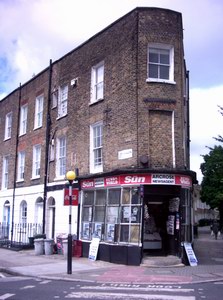 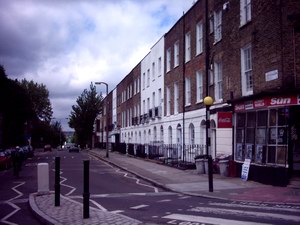 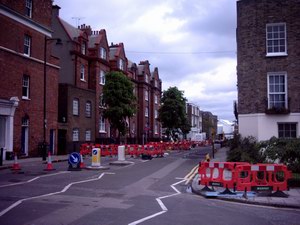 Previous: Who do you think you are?
Next: Sunset last night