The fear of going bald does strange things to a man – just ask Mark Oaten.

Thing is, there’s no turning back from it. Greyness can be dyed – or embraced as distinguished – while general creakiness and excess weight can be argued away with vague promises of the gym. Hair loss, however, is the end to your illusions of eternal youth.

In my case, I’ve spent the last couple of years cultivating a ponytail that reached halfway down my back. It’s gone now – sent to a charity that makes wigs for child cancer patients.

For the last month or so I’d been seeing signs that screamed ‘hair loss’. From the scalp pains and the variable depth on different parts of my head, to the slimmer ponytail and the dead hamster in the plughole each time I showered, it looked very much like the game was up.

My mum, briefly a hairdresser in her youth, disagreed. So did Beloved Other Half who, despite her fondness for radically short styles, still has more experience than me in possessing long hair. Both argued that hair can, and does, thin under the stress of length.

Nevertheless, I decided it was time for the ponytail to go. If the barber discovered acres of rolling space, we’d have an answer.

I’m now back living in my home town after 20 years away in Norfolk and London. The barbershop I used to go to when I was younger is still there, although the staff has – of course – completely changed.

Once, it was dominated by a cartoon Italian with long permed hair and a moustache, a twinkling smile, and a love for the ladies. Alas, it transpired that one of the ladies he loved was aged 14 and, faced with the police, he threw himself under a train. The young lad who cut my hair barely remembered him – he’d seen him for childhood haircuts but never worked with him.

These are the things that underline the passing years.

Has to be said, young Rez did a fine job on the hair. After checking three or four times that I did really want the ponytail cut off, he sheared it away. A brief look of panic crossed his face when I cried out “nooo, I’ve changed my mind”, but it was replaced by a broad grin when he checked in the mirror and saw from my expression that it had been my idea of a joke.

After a remarkably short time, and an even more remarkably small bill, I was shorn neatly and the ponytail, still secured by its hair band, was wrapped up in tissue in my pocket. He conducted a close inspection of my scalp and declared that no, I had nothing at all to worry about in the hair loss stakes. Not yet, anyway. 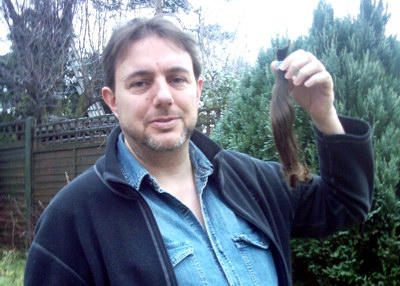 And the ponytail? That’s going to charity.

I have an ambivalent attitude towards cancer charities. Heroes during one close family member’s illness, villains during an in-law’s last months. However, I was determined that I’d do something useful with the discarded hair.

The Cancer Research UK page on the subject of hair donation is not terribly encouraging. But Beloved Other Half did some digging on those ol’ interweb things and came up with a charity called the Little Princess Trust (website / Facebook group) which was set up to provide wigs to children with cancer and other illnesses that cause hair loss.

Now, I’m not generally one for excessive pinkness. And I do tend to believe that little girls are better served by aspiring to be engineers rather than princesses. But there are times to be a grouch and times to shut up and embrace your inner sparkliness.

The Little Princess Trust was set up by the parents of Hannah Tarplee from Hereford, who died in June 2005 of cancer, aged five. It helps parents of children with cancer and other illnesses that cause hair loss to find and pay for realistic-looking wigs made from real hair.

And, obviously, the hair has to come from somewhere. Hence the donations page. The rules (lifted here word-for-word from their website) are simple:

It turned out, when measured, that my ponytail was exactly twelve inches. So off it goes.

I think I’ll stay short-haired for a while now. It’d be sad to turn 40 looking like a member of Status Quo, after all. But its nice, and a trifle ironic, to reflect that my brief panic about getting old has resulted in an action that will – hopefully – help someone young whose battle is simply to get where I am now.

Previous: A Christmas rant
Next: A year ago today…