Firstly, thank you for the positive response to the last post. I still don't think I have fans, but it's good to be reminded that I have readers who enjoy what I write, or find it valuable.

So I guess I'd better write something…

The interesting thing that happened today:

I beat a Lamborghini away from the lights on the way home… sort of. There's a big junction near Earl's Court where the westbound traffic lights are like the starting grid for a four-lane high-speed race track. I rolled to a stop there, focused mainly on the food I was trying to eat (a disgusting mix of processed cheese-like product and processed bread-like product) and only dimly aware of the sporty Peugeot next to me, and the beast on wheels beyond it. The Lamborghini was, in truth, an ugly thing, flat and chunky at the same time, like a playing card on steroids. But it looked fast.

The lights changed just as I was transferring some vaguely cheesish gloop to my mouth on the end of a breadstick that was more stick than bread. As a result I was very slow doing all that confusing business with pedals and gearsticks and what-have-you. Just as I was about to raise the clutch and drive off, having been stranded there for a couple of seconds (and you try waiting a couple of seconds at a green London traffic light normally and see what happens to you), I realised neither the Peugeot nor the Lamborghini had moved.

So I trickled forward a yard or two, suddenly bashful about being first out into the junction.

I looked uncertainly at the lights. They were definitely green, and I was sure I hadn't misremembered – green still meant 'go', didn't it? Sod it, I thought, let's go for it.

I moved out into the centre of the junction, the bit between my shoulder blades where a border guard's bullet would do most damage feeling horribly exposed. I expected at any moment half the Met Police's traffic division to descend on me and nick me for disobeying some new green light ordnance that the other two drivers knew about, but I'd somehow missed. At the very least I expected some sign of life from the other two cars – a synchronised unleashing as the drivers realised they could go and leapt forward like dogs from traps.

But as I disappeared into the distance, in my mirrors I could see they were only just starting to roll forward, two gleaming lumps of metallic testosterone left for dead by a nine-year-old Rover estate. 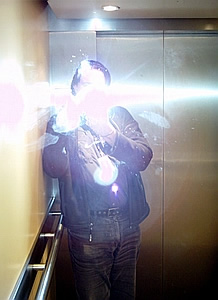 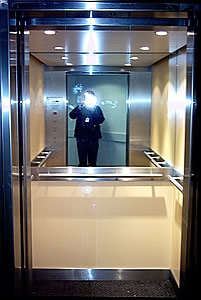 Need a lift, anyone?

The link to something that caught my imagination

Where are the UXBs in London

This site lists all the known unexploded bombs scattered around London left over from the German bombing raids during and after the Battle of Britain. It was, it seems, easier to leave them there for 60 years than defuse or disarm them. Many are in sewage works, which explains why no-one much fancied fishing them out in the 1940s. We must hope they, at least, don't go off any time soon – talk about a short sharp shower of whatsit… Another seven that I'd prefer to stay dormant for a further 60 years are in the bed of a river near where I live, or close to one of my local Tescos.

The unnerving thing is how vague most of the locations are: “Allotments north of sewage works, East Ham”. Yes, but which plot in the allotments? If I was an allotment-holder there, I'd want to know that before I started swinging a spade around, I can tell you.

Yikes. Do you think the owners know?

Yes, well. Let's see what there is to say here.

Aw hell, it's 5am and I wanna go to bed. You can wait another day for that one.

Not a lot of sleep in the last 24 hours. Yesterday I finally got to sleep at 7am – and was immediately hit by a nightmare in which a small, pale blue, poisonous fish had attached itself to the tip of my finger as I sat in bed reading. In the dream I was frantically waving my hand about in an effort to get the fish off me, and this violent activity, combined with a rising feeling of panic, woke me after just half an hour of sleep. Not best pleased, as you can imagine.

After that I stayed awake for a few hours, and finally managed to sleep from Noon to 6pm, when I got up for work.

And finally, some spam

From (allegedly) Colleen Faris came a mail with the subject line: “Market Wizard Stock”. Its body (or at least, the plain text part of its body) asked simply: “You are always missing reading. Does Joe hate laughing over there?”

It seems a fair question. I think we should be told.

Anything to say, Joe?