I love the sight of death in the morning 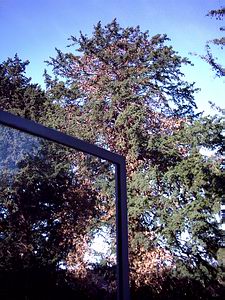 The biter bit
Dead brown ivy festoons a yew tree in the car park outside out kitchen window.

I'm pretty easy-going usually, but I have a real blind spot when it comes to parasites. Things like those wasps that lay their eggs inside grubs so that the lavae can eat their way out really freak me out.

Fortunately parasitic wasps aren't a big feature of English urban life, but I do have a reaction of almost visceral hate at the sight of poison ivy, which is rather more common. For me, one of the many pleasures of our short-lived allotment experiment was the slow death of the ivy choking the back wall after I cut a couple of inches out of its trunk at ground level.

Because that's the fail-safe way of killing the bloody stuff – remove a small section near the bottom and watch the rest, often hundreds of feet of it, slowly die over the next few months.

The car park behind our flats, which our kitchen looks out on, has a double row of yew trees running across it. They're magnificently tall trees, with a girth that makes one think they might have been planted as a cermonial avenue when the adjoining building was still Henry VIII's hunting lodge. They probably aren't actually that old, but they feel it.

One of them used to be completely swamped by ivy – the base of the trunk invisible because of the number of stalks running up it, evil poisonous green leaves crowding out the tree's own darker green right up to its tip somewhere in the distant sky, great long tendrils of ivy dangling down looking for something else to latch onto.

And then one day several months ago the managing agents of the flats sent in gardeners to do useful things like pollard some of the trees and, almost as an afterthought, they cleared the ivy from the bottom four feet of the tree. I came home from work to see broken strands of ivy hanging down in a ring at chest level like ripped-off arteries dangling from a severed head in a horror movie. It was a wonderful sight.

Since then, the ivy in that tree has been dying, bit by bit, day by day, and I've watched with a quiet satisfaction. Each morning when I get up (or afternoon, if I'm on shifts) I blunder into the kitchen to make tea, look out of the window, and see more dead ivy. No matter how foul my mood up to that point, it cheers me up.

It's a good way to start the day.