If you build it, they will come

A few days ago now, we took another day trip. Having been to a model village a while ago we decided to go one better this time – an open-air museum of full-size reconstructed buildings.

The Weald and Downland Open Air Museum is like a Battersea Dogs Home for threatened buildings – except you can't take the houses home.

Open air museums work very simply. If a suitably historical house or farm building or other type of structure is in danger of being demolished to make way for a by-pass or a reservoir or whatever, the museum carefully takes it apart, brick by brick and lath by lath, and reassembles it in its grounds.

The result is a curious thing – a jumble of buildings spanning several hundreds of years, scattered artfully around a valley or a field like an unusually design-orientated child's toys.

We've been to the Weald and Download several times before but never grow tired of it, and there's another one much closer to home just off the M25 in Buckinghamshire that we've been to as well.

It was pretty good day. Since we were last there they've put up a rather stunning new building to act as a workshop – a sort of Magrathea where houses are built.

One slightly disconcerting note was struck by the film crew crawling over the place shooting a documentary on the Great Plague. Costumed mediaeval peasants strolled around talking on mobiles or smoking filter-tips, and the timeless houses were surrounded by lighting rigs.

For the most part, the museum doesn't do historical recreation – it's interested in the architecture and, with a few exceptions, doesn't try to recreate the living conditions of the people who would have inhabited the buildings or fill the place with costumed guides slapping their thighs and singing 'hey nonny nonny'. This suits us fine as we hate that sort of nonsense.

The film crew disrupted that, as film crews always do, scattering straw everywhere and rigging washing lines between windows. But it was only a small part of the day, and interesting to see in action, so even professional grouches like us couldn't complain too much. 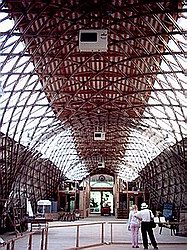 Wooden lattice roof
The museum's rather proud of this futuristic wooden building, which has a roof made out of a wooden grid lowered into place so that it warped into the right shape to fit its walls. 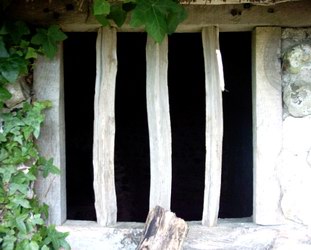 Draught includer
These mediaeval windows may have looked appealing, but they didn't do a lot to keep the weather out. 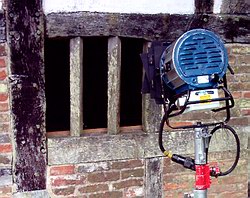 Hello Mum, I'm on the telly
A film crew was using the museum to shoot a documentary on the Black Death. Inside this window is a very sick man… 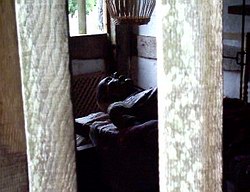 I feel a bit dizzy…
Actually this is a dummy laid out on a table, not an actor. Which is just as well, as behind the window bar his entire stomach has been opened out and pinned back with metal rods. 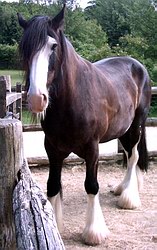 Appealing horse picture
No self-respecting rural life museum of any size can do without heavy horses. They're terribly photogenic – and they know it. 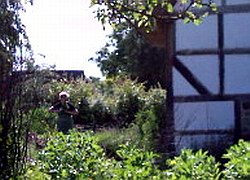 Gathering herbs
The museum has a cafe where some of the food is cooked in a Tudor kitchen over open flames. Here, one of its staff gathers herbs for the cooking. 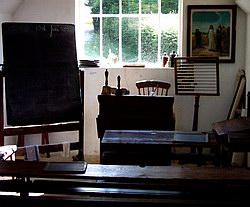 Pay attention at the back
The Victorian schoolroom is one of the more realistic recreations – it really did look as if the children had just been let out for lunch moments before. 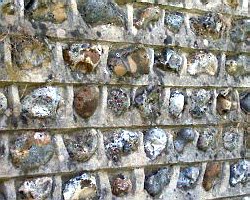 Flints
The schoolroom wall, endless rows of flints. I love flint walls because of the contrast: they're regular and regimented, but at the same time no two stones are alike. 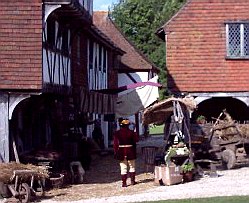 Where is everybody?
An actor playing a mediaeval merchant consults his walkie-talkie as filming winds down for the day. The museum's grouped a number of buildings together to make a passable version of a market town's main street. 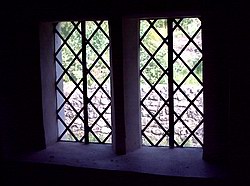 Through the rectangular window…
Just another shot through a window: I like them. Stop complaining – there's another five I could have put up but didn't. 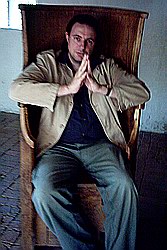 Come into my parlour, said the spider to the fly
Hey – it's my journal, I can post photos of myself from time to time, okay? 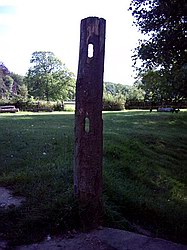 Previous: Only in England
Next: That ole '10 friends meme' again.