In search of the English Roswell

So, yesterday we went to have a potter around some woodland where, 26 years ago this month, an alien spaceship was seen to land.

The Rendlesham Forest Incident, in which a group of American airmen rushed out to what they thought was a crashed aircraft, is sometimes known as the”English Roswell”. Some, including a fairly senior officer, still believe with total sincerity that they encountered an alien craft that night. Naturally, a lot of people who can't be doing with that sort of thing have developed perfectly sensible arguments explaining why they didn't.

Our view? Just because an object flies and can't be explained, that doesn't make it an alien spacecraft. Equally, it's perfectly reasonable to assume there are some things in the sky – particularly the sky around two military airbases – that the average person has insufficient knowledge to explain. You can dismiss the suggestion that the airmen actually saw Orford Lighthouse (a tiny winking dot on the horizon when we were there yesterday) without having to accept they must therefore have had a close encounter.

These days the forest is rather different from that night in 1980. A combination of the Great Storm and regular Forestry Commission logging has radically changed the tree cover, the Americans have left the nearest base and, last year, the 25th anniversary of the incident was marked by the establishment of a three-mile marked “UFO trail” that takes a walker around the key locations involved.

Since the site is near the Suffolk coast, and we are on the west of London, it took us a while to get there. With the short winter days a factor, we tried to walk fast. We failed. By the time we reached the little clearing where the landing is supposed to have happened, it was pretty dark. Not as dark as the photos suggest, but plenty dark enough to reduce the visible detail and dramatically ramp up the atmosphere.

Do we think we stood in the shadow of where aliens once trod? Pffft – I seriously doubt it. Did we stand on the site of a mystery that, so far, has defied convincing explanation? No question.

The start of the UFO trail, in the Rendlesham Forest Centre car park 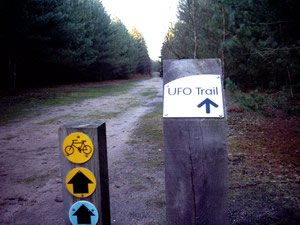 Easy, well-signposted broad paths make up most of the trail 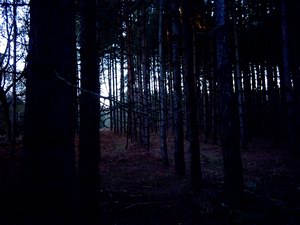 This object in the sky was easy enough to identify… 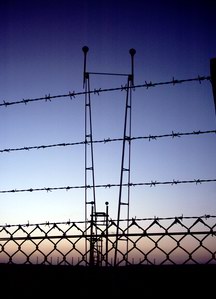 Landing lights near the gate of RAF Woodbridge – why are so many 'sightings' by military bases?

It just got darker… 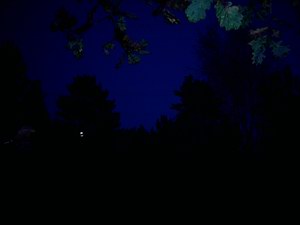 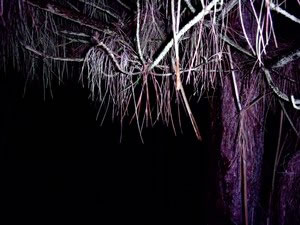 …until, by the time we got to the landing site, we could barely see a thing.

Which didn't stop us trying.

Previous: All the news that fits
Next: I deny everything