I was up in London today for a sort of an interview-thingy (can't say more – all very Secret Squirrel hush-hush, Kat knows but she's not telling, are you hon?). Anyway, afterwards I sort of accidentally blundered into the big Pride rally in Trafalgar Square and decided to stop for a bit.

It was all very cheerful and sunny, with loads of stalls and plenty of colour. Perhaps a bit less of a 'buzz' to it than I would have expected, though.

There were uniformed police *everywhere* – but most of them seemed to have taken part in the parade and were wandering around afterwards on the same terms as everyone else. One of the main sponsors was the Metropolitan Police Authority, no less…

So here's three photos from the event – a bit hurried and with less detail than I'd normally try to get, but hopefully worth posting nonetheless. 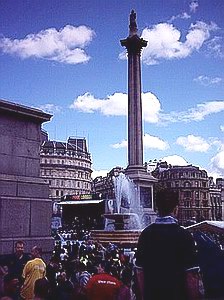 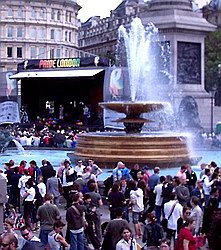 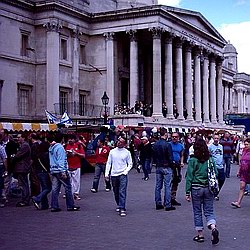 Young man, there's no need to feel down
Stallholders ranged from the Socialist Workers to the Met Police – all hoping to drum up recruits from the crowds

I couldn't tell if it was a tourist wanting to capture them for posterity, or if they'd asked him to use their camera to take a photo for them as a keepsake of the day. I hope it was the latter – they seemed a sweet couple.

Previous: The full Monty <— Gardeners' World reference
Next: I am the Norway of comedy