My route into work doesn't go by Buckingham Palace, so I missed all the drama. I go right past on the way home, however, and was amused to see the place crawling with coppers pottering up and down along the front and side – because, of course, there's just bound to be a repeat incident at 3am. I mean, you can't move in London at night for slightly dodgy blokes in silly costumes and doubtless there was a whole lot of Ninja Turtle impersonators concealed in the bushes who would have stormed the walls without the presence of the boys in blue. Where were they before it happened though, eh?

The best bit was the van, parked in front of the palace gates, that was being used by the constabularly as its base. It wasn't a proper police van at all – just some hire job from a rental company, all covered in logos and branding. I'm not suggesting our police are overstretched or anything, but even so…

I managed to snatch a shot of Harrods all lit up as I drove past, having slammed it a few days ago for its tastelessness. Personally I think it's the height of tackiness, but Beloved Other Half has intimated that perhaps I'm just being a big fat grump about it. What think you? (Also, a pic from a traffic jam in the tunnel on Upper Thames Street.) 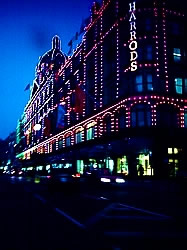 Harrods – tacky or classy?
To me, it looks like end-of-the-pier illuminations on a building that already was trying too hard…. 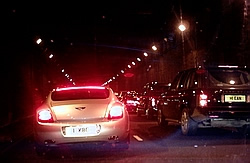 Tunnel vision
I think that was an Aston Martin ahead of me – hope the flash in his mirror didn't blind the driver.

Finally, for those who watched the Italian Grand Prix and were astonished that Ferrari allowed Rubens Barrichello to beat Michael Schumacher when he's contractually obliged to allow him to win, the picture after the cut (taken the day before the race) might explain why it happened. That's Michael on the left and Rubens on the right. 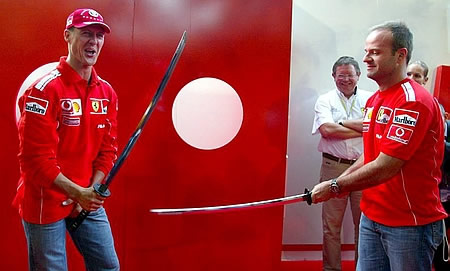 Previous: Of sisters and suicides
Next: Resolutions from an inkless day