The heavens opened earlier today with all the restraint of an overflowing bathtub and I dashed out to rescue various plants in danger of being swamped by runoff from the balcony above. With that done, since I was already wet, I grabbed the camera and went to explore.

It only takes a small storm to bring things grinding to a halt around here, and this was a big storm.

A couple of days ago I had to drive into work through a sudden and paticularly virulent thunderstorm, and did so accompanied by a never-ending liturgy of doom from the radio's travel news.

The whole of west London had ground to a halt for road and rail travellers trying to leave the city. I was heading inwards and, even though the roads in that direction were open, I still had problems with floods and traffic jams – until the moment I crossed into east London, where the rain hadn't fallen, and the roads were magically empty.

Today I was at home, and was able to watch the far side of the flats disappear behind swirling rainclouds and the tarmac of the car park disappear under ankle-deep floodwater. We rent a garage, with a roof that leaks, and I checked it to see how bad things were. A steady river of water was streaming out of it from under the door. Inside, rain was hammering down onto the wing of the car and splashing onto the waterproof sheets I'd spread over the shelving.

Once it all stopped there was silence – apart from a symphony of car alarms set off by the storm, and the sirens of police and fire fighters scrambled to deal with our complete inability to handle a sudden dose of the wet stuff. 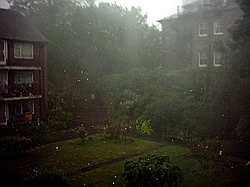 Who put the lights out?
You wouldn't guess this was early afternoon on a summer's day – swirling rain blocks out the sun. 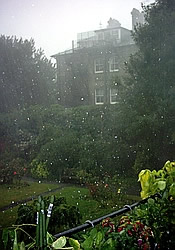 Heavy water
The flash has picked up individual raindops at the height of the storm. 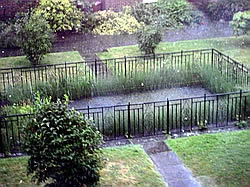 Goldfish heaven
Yesterday the toads were all out on the grass – today they stayed at home with the fish as the pond was topped up. 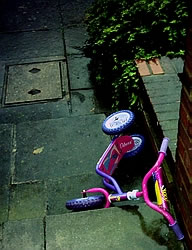 Game over
A child's abandoned tricycle marks how the rain brought playtime to a sudden end. 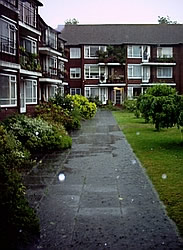 Pathway of puddles
Sheltering under a tree, standing ankle-deep in water, watching the path back to the flat disappearing under water. 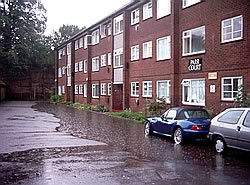 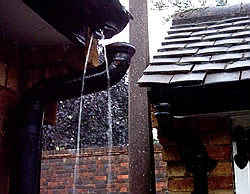 Gutter failure
Just one of those little maintenance jobs that never quite got done. 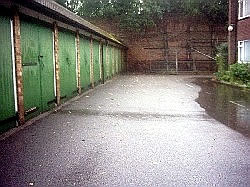 The source of the Nile
A river runs from the door of our garage, thanks to its leaky roof.

Previous: Hot stuff, baby
Next: "What you want me to say is 'I love you'…"