London Life, Me Me Me
come and have a go if you think you’re hard enough, cowardice, Feltham, violence

I long since learned that being beaten up turns you into a coward. I proved it again tonight: it's an unpleasant feeling that leaves you bitter and twisted up inside.

It's, what? Six years since I was attacked on a train on the way back from a Susan Kramer for Mayor campaign rally. Something like that, anyway. A gang of six or seven young scamps decided to play baseball with my head, using stolen bottles of cheap sparkling wine. No particular reason for choosing me.

Call it a score draw if you like – seventeen stitches in five head wounds for me, short spells in Feltham Young Offenders' for two of them. I also, by happy coincidence, got the front page of the local papers in the week I was selected as the local Parliamentary candidate, since it coincided with the sentencing. That was quite nice.

It's not been so much fun since then.

I was entitled to quite a bit of compensation, thanks to the scarring next to one of my eyes. Not a fortune, but enough for a holiday. Or two. Possibly three, if one was at Butlins. But I couldn't bring myself to fill in the forms or have a new set of photographs taken, so that was the end of that.

And I still find rowdy groups of kids intimidating, even when there's absolutely no threat from them. Strangely, I don't find the ones that are out for trouble any more frightening, although they do make my guts burn with anger and hatred to a quite alarming extent.

I'm pretty certain I'd intervene if I thought someone else was in danger – I remember an incident which I'm pretty sure I wrote about where I thought I was going to have to – but I know there's circumstances where I would have once taken a stand that I would now walk past. 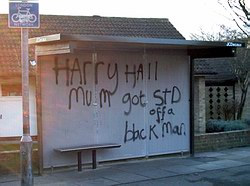 There's a bus stop on the main road where I live, and the bus route it serves comes straight out of one of the estates where the residents finally made me give up on local politics – as I often say, I couldn't see why we were flogging our guts out for them when their ambitions went no higher than producing endless ugly fatherless babies, torching cars and putting National Front stickers on lampposts.

It's frequently vandalised – sometimes completely trashed – although at the moment it's not in too bad nick. Tonight as I approached it on the way home from work there were four youths at it, waiting to head off towards the town centre. The bin by the bus stop is one of those with a metal base and a heavy plastic sleeve that slides over the top. The kids had the sleeve off and were kicking it around. I had to walk right past them to get home.

The old me would have challenged them, told them to leave the bin alone – possibly even have got angry with them. The new me walked by, as close to them as you are to your computer monitor, without saying a word.

I turned down the drive to my flats, and behind me I could hear deep hollow 'booms' as they had their fun with the bin. Behind me walked one of my neighbours, too far off to identify. He, too, had walked past without saying anything.

Beloved Other Half says I shouldn't beat myself up over it, that no-one should expect to come through what I came through and still be equipped to take action under those circumstances.

I know what I say, though…

Previous: Winners and losers
Next: BAA are no fun at all