The Sound of the Crowd

Last night was the Human League gig at the Reading Hexagon. Which is an unhappy thing, because now I’m remembering having been to it, instead of looking forward to going to it. But nevertheless, it was a great evening – me, Beloved Other Half and Jules from the Frozen North sang ourselves hoarse and clapped and danced until our hands and feet were ready to rebel – and then we queued outside in the drizzling rain to meet the band and get autographs.

Here, as best as I can manage, is the set list:

Mirror Man
Open Your Heart
Tell Me When
All I Ever Wanted
The Lebanon
First Man In Space
Empire State Human
Life On Your Own
The Stars Are Going Out
Human
Heart Like A Wheel
Sound Of The Crowd
Love Action
Fascination
Together In Electric Dreams
Don’t You Want Me
Encore:
Being Boiled
The Things That Dreams Are Made Of

Anyway, as ever, here are photos: 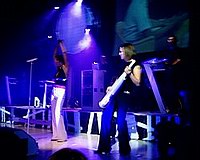 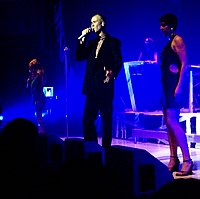 The Stars Are Going Out
Susan, Phil and Jo – this is a brilliant album track which they performed after a poll on the fan website Secrets Online. I’m dead chuffed because it was the song I voted for 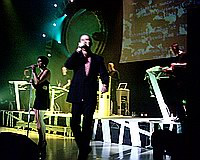 Heart Like A Wheel
It may sound poppy, but this is a stridently anti-war song – and the screen behind them is scrolling fact after fact about the Iraq war to back it up

Sound of the Crowd
Keyboardist and song-writer Neil Sutton steps out of the shadows to join Jo. He’s an unassuming man – when I asked for his autograph last year he couldn’t understand why I was interested in talking to him when Phil, Jo and Susan were around too

Sound of the Crowd II
Phil’s a restless figure on stage, barely still for moment, always moving from one side to the other at a run, singing to different sections of the audience – very useful if you’re taking photos…

Sound of the Crowd III
Nic proves once again that electronic music doesn’t have to mean three blokes standing behind racks of keyboards (which is not a dig at the support act, Trademark, who were exactly that. I liked them enough to buy their CD)

Love Action
Nic and Neil in front of one of the more inspired visuals of the night – love hearts with random lyrics on them. The cry has already gone up for t-shirts…

Don’t You Want Me?
Susan displays her unique fashion sense as she encourages the crowd to sing the line “I still love you” 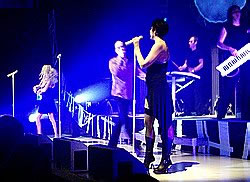 The Things That Dreams Are Made Of
Susan, Phil and Jo in the world’s best encore song 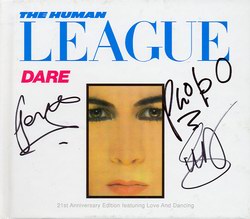 The Soundtrack to a Generation
Dare / Love And Dancing 21st Anniversary Edition, as signed by Jo, Susan and Phil

Previous: Upside down and sideways
Next: The tyranny of football